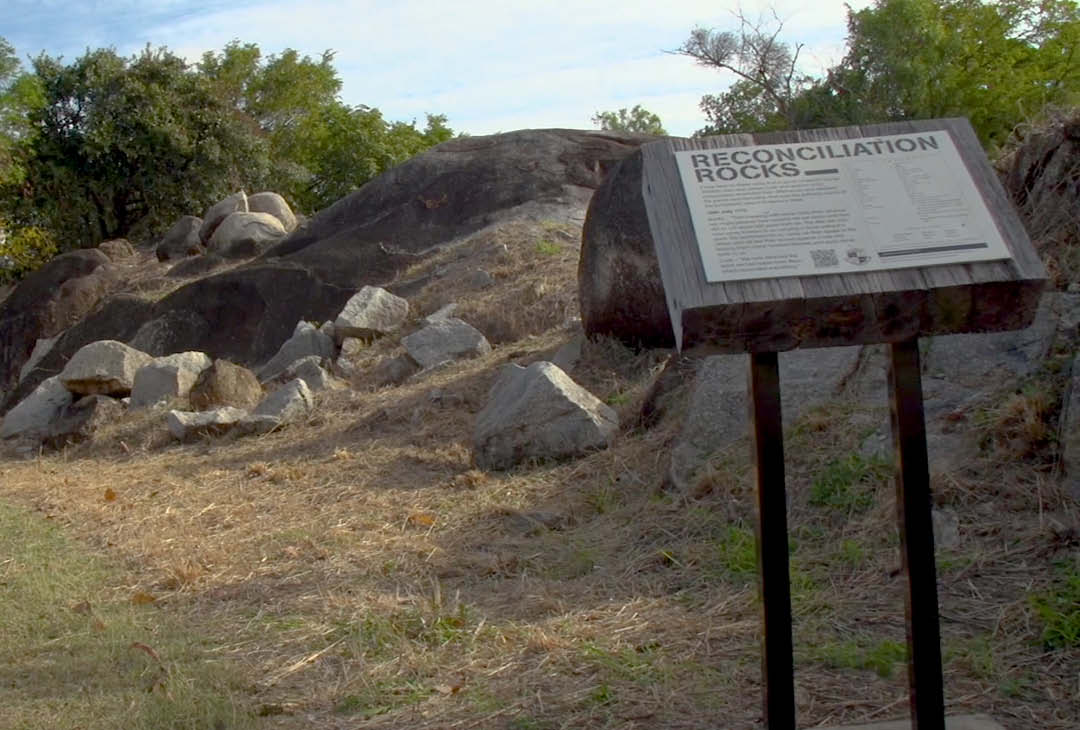 The place where Australia's first recorded act of reconciliation between indigenous and non-indigenous Australians is now heritage listed.

On 28 May 2021, the Queensland Heritage Council have listed the site of Reconciliation Rocks in Cooktown on the State Heritage register. This is significant, as the site marks the place of the first recorded act of reconciliation between the First Nation peoples and Lieutenant James Cook. On 11 July 1770 Lieutenant Cook’s HMB Endeavour struck a reef off Cape Tribulation, south of Cooktown. The Endeavour was badly damaged, and Lieutenant James Cook and his crew spent 48 days in the area.

Reconciliation Rocks are a group of granite boulders on the banks of what is now known as the Endeavour River (Waalumbaal Birri) in Cooktown.

The site is deemed “enormously important in demonstrating the evolution of both Queensland’s and Australia’s history, and interactions between the country’s first inhabitants and Europeans” said Debbie Best, Chair Queensland Heritage Council. “The Guugu Yimithirr Bama, after observing the Europeans, made contact with the visitors and the two cultures exchanged food, goods and language.”

On 18 July 1770, a group of Guugu Yimithirr that were onboard the HMB Endeavour noticed several turtles on the deck of the vessel, to be used as a food source by the crew. But the turtles had been taken without permission from sacred breeding grounds. A disagreement followed and the Guugu Yimithirr set the grasslands around the crew’s campsite on fire to cleanse the sacred land. Cook fired his musket and hit one of the Guugu Yimithirr Bama which was a further violation to shed blood on this neutral land. It is agreed by historians, elders, and the local community that several men visited Cook and his crew to try to make peace. A Guugu Yimithirr elder symbolically held out a spear with a broken tip as a symbol of peace and formalised the ritual by blowing sweat as a gesture of friendship. Despite the language barrier, it was an exchange that was welcoming.

The application was made by the National Trust of Australia (Queensland) with the Hopevale Congress Aboriginal Corporation and in collaboration with the local community.

He explains that "On 19 July 1770 Cultural Governance of the Guugu Yimidhirr people, employed to overcome a disagreement over turtles onboard the Endeavour. Yabaarrigu & Lieutenant James Cook reconciled their differences through Respect, which brought about the very first Reconciliation in History, elements within this story are the blueprint for a progressive Nation."

Acting CEO of National Trust Queensland, Jayme Cuttriss says, “This is a very significant day for the local people of Cooktown, and to the Australian people, as the interaction that took place at reconciliation Rocks was a defining moment in our nation’s history.

It is so appropriate that we receive this wonderful news in National Reconciliation Week with the theme More than a word, Reconciliation takes Action. On behalf of the people of Cooktown, we thank the Queensland Heritage Council for this action to recognise the importance of Reconciliation Rocks and the actions that took place there.
It is a story that every Australian should know. We encourage Australians to learn the story of the first recorded Act of Reconciliation and visit this very special place.”

This short video below explains the story and shows why it is important.